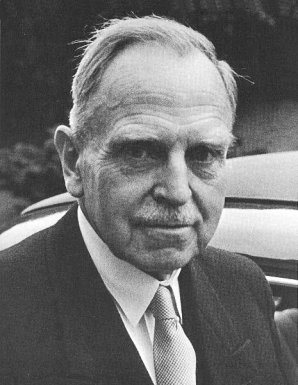 Otto Hahn was born in Frankfurt am Main in Germany. As a teenager he showed an interest in chemistry and decided to become an industrial chemist, although along the way he diverted to an academic career.

After studying in Germany, he took up posts in London and then Canada where he worked on radiochemistry, a field for which he became well known. He returned to Berlin in Germany where he met Lise Meitner with whom he collborated for over 30 years. Together they discovered the element protactinium and worked on, among other things, processes of irradiating uranium and thorium with neutrons.

At the end of 1938, working jointly with Fritz Strassman, Hahn discovered that bombarding uranium with neutrons produced barium, during experiments in the buildings of Kaiser Wilhelm Society for Chemistry. After consultation on the results with Lise and her nephew Otto Frisch, now based in Sweden, the term “nuclear fission” was coined. The work was published in Naturwissenschaften.

Hahn was awarded the Nobel Prize for Chemistry in 1944 for “for his discovery of the fission of heavy nuclei”.