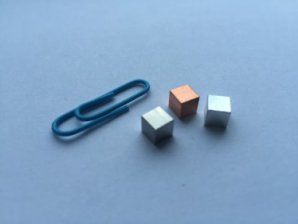 Shielding is important in nuclear facilities to stop unwanted neutron interactions (See our Simulating Laminate Shielding Concepts article for more information). So, as part of SINE2020’s Instrumentation: E-tools work package, innovative shielding concepts and materials for neutron sources are being developed to make them lighter and more cost-effective.

Eszter Dian at SINE2020 partner Hungarian Academy of Sciences, Centre for Energy Research,(MTA EK) has been contributing to this project by performing irradiation measurements on shielding materials at the Budapest Research Reactor (BRR). Activation studies have been implemented on standard and experimental concretes and typical metal components used in shielding structures.

Firstly, the elemental compositions were determined via X-Ray Fluorescent (XRF) spectroscopy measurements of three metal samples: aluminium, copper and steel and two concrete samples: a standard reference concrete and a sample of the polyethylene B4C based concrete, being developed by ESS (Invented by Carsten Cooper-Jensen) for E-tools Task 8.2. The metal samples were provided as 5 × 5 × 5 mm3 cubes and the concretes (received as grist) were ground and formed into pellets.

Next, Prompt Gamma Activation Analysis (PGAA) was also used to study the materials. In this technique, the samples are irradiated in a guided neutron beam and the so-called prompt gamma-rays generated by neutron capture are detected. This output provides information on the elemental and isotopic composition of the studied material, being applicable for the light elements of the bulk material.

Finally, all the samples were irradiated with neutrons in the vertical thermal and fast irradiation channels of the BRR for Neutron Activation Analysis (NAA). After 2-4 days of cooling gamma-spectroscopy measurements were performed repeatedly for two months on the activated samples, detecting the gamma-radiation accompanying the radioactive decay. These measurements provide additional information on their elemental compositions, revealing the activation properties of the studied materials and can also be used as reference data for the Monte Carlo simulations.

At present, the experimental activation data is still being analysed by Dávid Hajdú (PhD student at the MTA EK), and compared to MCNP and CINDER’90 simulations on neutron activation, performed with the nominal and measured initial compositions of the irradiated samples.

Initial results from these simulations, performed in collaboration with Esben Klinkby at the Technical University of Denmark, suggest that the new polyethylene B4C based concrete has lower activation values than the reference concrete.

The ultimate aim is to be able to define accurate elemental composition of the new concrete in order to provide detailed and realistic data for modelling activation so that shielding designers can predict, and therefore prevent unacceptable radiation doses. If reliable shielding material composition inputs are incorporated into simulation software, this would aid future instrument designs and improve the quality and safety of neutron measurements.

Pellet made from grained PE-B4C concrete for XRF analysis