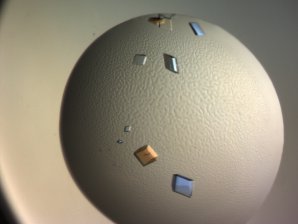 Zoë Fisher and Katarina Koruza from the ESS Deuteration and Macromolecular Crystallization (DEMAX) Support lab and Lund University have been using vapour diffusion methods to grow large protein crystals for neutron techniques as part of SINE2020's Crystal Growth work package. However, as well as being able to grow crystals large enough for these techniques, they also want to make them deuterated. Deuterated versions allow for improved signal-to noise ratio, reduced incoherent background and the use of contrast variation methods.

The team have attempted to make large crystals of various proteins including the membrane protein Tomato thymidine kinase (TOTK1) and Superoxide dismutase (bSOD) which is present in all organisms and is involved in the ageing process. However, although they managed to grow nice crystals they just weren’t big enough– less than 0.1 mm3.

But Zoë and Katarina have had much more success with human carbonic anhydrase (HCA) proteins. The HCA IX protein in particular is implicated in cancer metastatis and has emerged as a possible target for cancer detection, imaging, and treatment. Neutron techniques could provide details about the active site – hydrogen bonding, water organization, ligand-binding – that would help with the design of improved cancer drugs.

Wild type HCA II, HCA IX Mimic (where part of the HCA II molecule has been adapted to mimic the active site of the HCA IX protein) and a HCA IX surface variant (SV), which has 6 surface mutations to make it more soluble and stable, were the proteins chosen for the project. When it is not efficient to make deuterated proteins by making them from scratch or buying them commercially, they are deuterated via H-D exchange where it is “soaked” in a deuterated solution (buffer). For this work they were all expressed in E.coli under hydrogenous and deuterated conditions to make H and D versions.

They then set out to crystallise the proteins using vapour diffusion methods (See our Phase diagram crystal growth article to find out more about how they do this) so the crystals could be studied using both x-ray and neutron crystallography.

This was not an easy task. Proteins are very sensitive. It was necessary to use set-ups that are stable for long incubation and equilibration periods. The temperature, evaporation rates, pH and protein and precipitant concentrations all had to be carefully controlled using crystallization wells and automatic control, for example ranging the temperature up and down as required.

Additionally, in order to make crystals large enough for neutron crystallography, you need to use a large volume of starting material, typically 100-500 microlitres or 100s of mgs. These big volumes mean that crystal growth is slow – so conditions needed to be controlled for many months at a time.

But with perseverance, Zoë and Katarina have successfully managed to grow a HCA (IX) SV crystal over 1mm3 and a 1.8 mm3 crystal of HCA (IX) mimic. They have now been able to obtain x-ray results and also neutron results from LADI at ILL and iBIX in Japan.