Helmut Schober to be the next ILL Director

Prof. Helmut Schober has been appointed, with effect from 1st October 2016, as the new Director of the Institut Laue-Langevin in Grenoble. 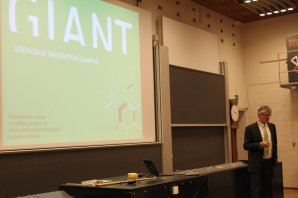 Prof. Schober was born and grew up in Bavaria, Germany. He studied physics at the University of Regensburg and the University of Colorado in Boulder (USA), specialising in particular in the spectroscopy of molecular systems. He then worked as a researcher at the University of Mainz and at the Forschungszentrum Karlsruhe, before joining the ILL. His research focused on fullerenes, the dynamics of liquids and glasses and on neutron instrumentation.

Professor Schober is also Associate Professor at the University Grenoble Alpes, after being visiting professor at the Technical University of Munich. He is a former chair of the German Committee for Research with Neutrons (KFN) and was the coordinator of the European Neutron and Muon Integrated Infrastructure Initiative (NMI-II).

Professor Schober will take up his duties on 1st October when Professor Bill Stirling, the current Director of the ILL, completes his tenure.

When asked about his appointment, Prof. Schober said:
“Being appointed Director of the ILL is both a great honour and, at the same time, an enormous responsibility. For nearly 50 years, the ILL has been shaping European science by safely operating the world’s most intense neutron source. The reliability of the source and the continuous reinvention of the scientific instrumentation have laid the foundations for a research programme that has never ceased to attain the highest levels of excellence. With its service-oriented user model, the ILL has forged close links with Europe’s academic research network and made an important contribution to European integration.
The challenges lying ahead of us are certainly not to be underestimated. Our societies demand ever higher standards of safety, in particular when it comes to nuclear installations. Scientific results are increasingly scrutinised for their direct impact on helping to solve pressing societal questions. I am convinced that by building on its intrinsic strengths, by which I mean its highly competent workforce, its dynamic, loyal and diverse user community, and strong support from its governing bodies and funders, the ILL will be able to face the challenges that lie ahead. For my part, I promise to do everything in my capacity to guide the ILL successfully into the future.”

Helmut Schober is the former coordinator of the European Consortium of Neutron Facilities, NMI3.