MCPL: a new format that simplifies data interchange between applications 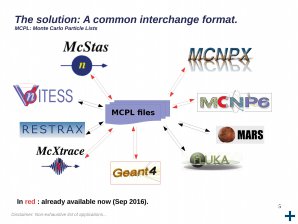 Scientists occasionally encounter situations in which it would be beneficial to be able to capture a certain subset of particle states present in a given simulation, in order to continue their simulation at a later point. Implementing such capabilities often involves tedious writing of customised code to fit a specific situation. To address this issue, a team part of the SINE2020 e-tools work-package as well as the brightnESS project has developed the Monte Carlo Particle Lists (MCPL) format.

The MCPL format provides flexible yet efficient storage of particle-state information. The aim is to simplify and standardise interchange of such data between applications and processes. MCPL can replace the plethora of custom converters with a more convenient scenario in which experts of each framework implement converters to the common format, as a one-time effort. The idea is that users of the various frameworks can simply activate those pre-existing and validated converters in order to carry out their work.

The core parts of MCPL are implemented in portable and legally unencumbered C code. MCPL interfaces were created for several popular Monte Carlo particle simulation packages such as Geant4, MCNP, McStas and McXtrace. The code has been made freely available under the CC0 1.0 Universal Creative Commons license so that anyone who finds it useful may adopt it into existing packages and build-systems, and create converters and plugins specific for the applications they use. The first version of MCPL has been released recently and further details are explained in this paper. All updates will be available at the MCPL website.

The idea for developing the MCPL format arose from the requirements of simulations at neutron scattering facilities. Monte Carlo simulations are a popular technique to study the transport and interaction of particles and radiation, with applications in a range of fields such as high energy and nuclear physics, space, and medical science.

Another example was the use of MCPL to demonstrate a useful method for disentangling the simulation of cosmic showers from subsequent faster simulations of neutron transport in the Earth crust. The simulation strategy employed eases the use of computational resources, and provides a means for cross-comparison between simulation codes.

Please let your colleagues who use relevant applications know about MCPL.