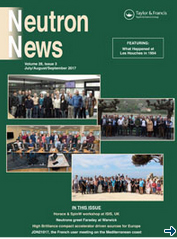 Europe for Neutrons—Neutrons for Europe… SINE2020

Attentive Neutron News readers might have come across Miriam Förster's contribution on the European funded projects NMI3 and SINE2020 in one of the latest issues. The Neutron and Muon Infrastructure Integrating Initiative (NMI3) was launched 2009. Including the last successful project “SINE2020”: www.sine2020.eu, the European Commission supported the European neutron community with about €23 million within the framework of the research and innovation program HORIZON2020. Many neutron users might have known NMI3 through the so-called TNA (trans-national access) funding, which financially supported the access to national neutron and muon facilities. Joint Research Activities (JRAs) constitute a second pillar of these projects, where specific scientific and technical challenges were addressed in a common approach by the partner facilities. The largest success of these projects and their real power are nevertheless in the networking activities. It is quite remarkable that different national sources together with universities and research centers have fostered a common neutron network which the ILL is honored to coordinate. The latest proposal of this community, SINE2020, was prepared around two main objectives: first, preparing Europe for the new opportunities of the future spallation source ESS in Lund (Sweden) and second, developing the innovation potential of large-scale neutron facilities.

The ESS, with an investment budget of about €1.8 billion, is currently the largest ESFRI research infrastructure project/landmark planned to start its user program with eight instruments in 2023 and to be fully operational with 22 instruments in 2029. The success of the ESS, in terms of scientific output in societal relevant sectors, depends on a continuously growing, motivated neutron community with its scientific excellence and its capacity for constantly innovating the neutron scattering technique.

Instrumentation at the ESS will be powerful, and also partly new to the user community. Having the right environment to perform the experiments, in terms of sample environment, support laboratories, or data reduction and treatment, is key. SINE2020 contributes to these challenges through its networking and joint research activities, which are structured into 10 different work-packages (WPs). Four WPs enhance the collaboration of the present user community and address future generations of neutron users from academia and industry. Ines Crespo, former information manager of SINE2020 at TUM, explained the importance of dissemination and Communicating Neutron Scattering in a recent issue of Neutron News. Six further packages concentrate on specific scientific and technical components identified as important ingredients for future scientific challenges at present neutron facilities and at ESS in the long term.

Working in a complete international environment and for an international network, it is tempting to cherish the illusion that Europe as a whole should collaborate like the ILL or SINE2020 on their reduced scale. But even in the best hidden corners of any of our laboratories, it became difficult to ignore “multiple … ‘whomever first’” tendencies in Europe and elsewhere. Since the start of the SINE2020 project in October 2015, eighteen months ago, several elections sent out nationalistic shock waves, not only in Europe. As a possible consequence of Brexit, our British colleagues at the ILL have to have worries (justified or not) about visa formalities for working at a place, which 50 years ago was built to overcome national borders.

Among all the objectives of SINE, the modest contribution to the last letter E (Europe) might be the hidden, but most ambitious one of all. The scientific progress and innovation of neutron techniques are in the heart of SINE. But science is a vector for international cooperation and for overcoming borders, national and mental ones. Especially neutron science demonstrates the dual importance. The 50th anniversary of the foundation signature of the ILL on January 17 of this year is probably only known to the neutron world, but it is a strong symbol for the post-war Europe. The will of a scientific collaboration in the nuclear sector between France and Germany, only 20 years after the end of the Second World War, fostered the European neutron community in the following decades. Today's large-scale neutron facilities all over the world act as natural platforms for sharing science and mixing cultures. The ESS should probably be seen as logical next step for this community with its capacity for adapting neutron science to the current societal challenges—including Europe.


Back to previous page