What if neutron scattering uses the same type of detectors used to look into space?

A SINE2020 team is working on developing Resistive Plate Chambers for neutron detectors. 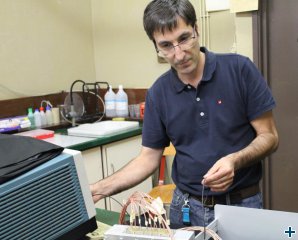 Resistive plate chambers (RPCs) are widely used for large area detectors (over 100m2), as for instance, in High Energy Physics to study the nature of the particles that constitute matter or in Astroparticle physics to observe cosmic rays. These detectors, due to their simple structure, are not expensive, which make them very suitable for large area applications. Despite the simplicity, they provide very good spatial resolution and very fast timing. Researchers from LIP Coimbra, Portugal, are investigating the use of RPCs for neutron scattering detectors in the framework of the SINE2020 Detectors work-package.

I talked with Luís Margato who told me that, RPCs don’t seem to have ever been used for neutron scattering. So why does his team think they could be a good solution?

Looking inside the detector

Detectors are used to identify with high precision the localization of neutrons interaction during an experiment. The team will investigate what happens when 10B-coated RPCs are used for neutron detection and how they perform.

The team will work on the construction of position-sensitive 10B4C coated RPCs with a multi-layer configuration. The 10B4C coatings for the RPCs have been produced by the ESS Detector Coatings Workshop. Detector prototypes evaluation with thermal neutrons will be performed in a beam line at FRM II with the collaboration of Karl Zeitelhack. 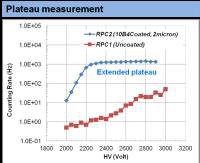 The team started by a simple RPC configuration (with only one gas-gap) and thus designed two prototypes to be tested, one of them with a 10B4C-coating and another one without. In July 2015, within the framework of a previous project, they tested the two RPCs prototypes at the CT2-beamline of the Institute Laue-Langevin in Grenoble, France. The results showed that the detection efficiency of the RPC coated with 10B4C was just as high as expected (i.e. previously calculated via Monte Carlo simulations). The experimental results showed an extended plateau as a function of high-voltage, in a region (see graph) where RPCs show low sensitivity to minimum ionizing particles (MIPs), which means the detector is sensitive to neutrons while the sensitivity to gamma rays is expected to remain very low. A spatial resolution bellow 1mm FWHM was demonstrated in these preliminary tests. 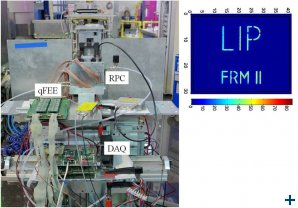 After the initial good results, the team joined the SINE2020 project and started to investigate one of the main parameters of RPCs. They wanted to understand how the gas gap width influences the RPC response. They designed two prototypes and tested them at the FRM II Neutron Source in Garching, Germany, in July 2016. The resolution improved considerably, with results showing a 2D position resolution of at least 0,5mm FWHM for both coordinates.

At the moment the team is characterizing the gamma sensitivity of the two RPCs tested at FRM II with 22Na and 60Co gamma sources at LIP; they are examining the waveforms of the Fast and Slow component of the induced signals, with the intention to check the possibility of pulse shape discrimination (PSD) to reject gamma rays and background events; and they are designing and building a stack of double-gap RPCs with narrow gas-gap widths, taking into account the results obtained at FRM II.

In the coming years, the team plans to build a multi-gap RPC, coated with 10B4C, and test it with thermal neutrons. Monte Carlo simulations will help consider potential interactions of neutrons with all the materials involved in an experiment (e.g. windows and detector components) and how these influence detector performance.

Benefits of taking part of SINE2020

Taking part of SINE2020 has important advantages for the LIP-Coimbra team. Funding through SINE2020 was essential for the team to pursue their R&D activities on innovative detector technologies for thermal neutrons. Continuous access to beam-lines on neutron facilities to perform the evaluation of detector prototypes shortens the time required for developments and new ideas to be realised.

A key aspect is the possibility of exchanging knowledge and experiences with the detector expert community of the European-leading neutron facilities. This is fundamental for the team to drive its know-how towards the detector requirements.

The opportunity to continue collaboration with partners from former EU Framework-Programmes (FP6 and FP7), profiting from prior knowledge, contributes to a cordial environment and enhances synergies among us.

Andrey Morozov, LIP, when the fists tests of the RPCs with neutrons at ILL-Grenoble, with the collaboration of Bruno Guerard.

Alberto, LIP, working on large area RPCs to be used not for neutrons but for high energy physics.

Large area RPCs to be used not for neutrons but for high energy physics.

Thanks to Luís Margato, Andrey Morozov, and Alberto Blanco from LIP Coimbra for reviewing this article.