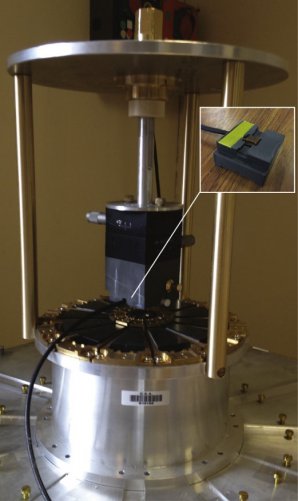 Small Angle Neutron Scattering (SANS) and neutron imaging techniques are extremely valuable tools for investigating the meso- and macroscopic structures of soft condensed matter (colloids, polymers, gels, biological materials etc.). However, they do have a limitation: they do not provide dynamic structural information like diffusion, transport quantities or nuclear relaxation times that are often key to understanding the dynamic properties of soft-condensed matter through the measurement of molecular correlation times and local mobility modes like diffusion coefficients. Nuclear Magnetic Resonance (NMR), on the other hand, is a technique that is very good at determining this information.

Jean-Marc Zanotti (LLB, CEA), Patrick Judeinstein (CNRS, LLB) and Dimitris Sakellariou (CEA, NIMBE) have proposed the development of in situ NMR measurements on neutron instruments. With Rodrigo de Oliveira Siva, a post-doctoral fellow hired on the project at a central position, and with collaborators from LLB, they been working on combining the two techniques for the Sample Environment work package. By adapting a low-field single sided NMR spectrometer to fit on a neutron imaging machine (F. Ott, LLB, CEA and C. Loupiac, AgroSup, Dijon) it would make it possible to probe in-situ structure of a sample at the micrometer scale using neutrons and simultaneously assess the dynamic processes at play within this structure.

The first task was to develop a probehead for fitting the NMR spectrometer to the neutron instrument. The static magnetic fields of the NMR are positioned perpendicular to the neutron beam. The full details of the NMR setup have been published. (P. Judeinstein et.al. Low-field single-sided NMR for one-shot 1D-mapping: Application to membranes Journal of Magnetic Resonance, 277, 25-29, April 2017).

Figure 2. (a) Picture of the NMR-Neutron probehead (cover not shown). The copper NMR coil tightly surrounds a part of the Hellma® sample cell at immediate proximity of the neutron beam section. (b) 3D view of the probehead adaptation onto the NMR spectrometer. Here, the NMR-neutron probehead cover necessary to control the heated air stream used for the sample temperature regulation is shown. From, de Oliveira-Silva et al, Journal of Neutron Research, DOI 10.3233/JNR-190114

The very first NMR/Neutron experiment was performed in March 2017. It took place on the imaging station IMAGINE at LLB in France. The food science-oriented experiment looked at the hydration kinetics of a porous starch sample hydrated with H2O or D2O. This experiment was successful as the neutron signal over the hydration process was well detected. Thus, the technique works and during the process, instrumental improvements were also identified. An article to be submitted to Journal of Neutron Research is in preparation. It will illustrate the potential of the NMR/Neutron Imaging coupling in the field of food science.

Since then, the experimental team, Rodrigo de Oliveira-Silva, Agathe Bélime, Clémence Le Coeur, Aexis Chennevière, Arnud Helary, Fabrice Cousin, Patrick Judeinstein, Dimitrios Sakellariou and Jean-Marc Zanotti, have now successfully coupled their low-field NMR system to a SANS instrument, PAXY at Laboratoire Léon Brillouin in Saclay, France. They were able to probe, in situ, the temperature-induced phase separation of a concentrated Poly (Methacrylic Acid) solution at its Lower Critical Solution Temperature. The NMR technique was able to add meaningful dynamic information, such as diffusion, to the SANS results. The work is published in the Journal of neutron Research (in press, Journal of Neutron Research, DOI 10.3233/JNR-190114).

With the help of SINE2020, the neutron community now has a new promising experimental approach that can provide structural and dynamic information in just one experimental procedure. There is huge potential to finely probe systems and applications spanning from geology to biophysics to help users from academia and industry.

Back to The Road to the ESS.