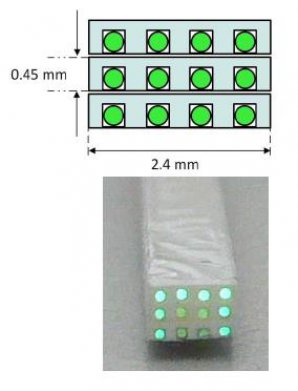 A scintillator is a material that emits light when a particle has hit it. If this light is then measured and converted into an electrical signal we can use this information to find out interesting information about the original particle. If we can also divide the signal caused by the particle into both an X- and a Y-coordinate we can gain two-dimensional data.

This is the process that SINE2020 scientists Malte Hildebrandt, Jean-Baptiste Mosset and Alexey Stoykov, based at PSI in Switzerland, want to achieve to make new 2D position sensitive neutron detectors that could provide an alternative to helium-3 detectors. These will be great for the ESS and other neutron sources as helium supplies are expensive to source. The team have been investigating two different approaches for these new designs and for both the following components were used:

1. Scintillating material – in these detectors, the neutron is the particle we want to study. Now we need a material that can emit light when a neutron has hit it. This is not always easy as most scintillating materials are only sensitive to charged particles and neutrons are neutral.

The scintillation material of choice is ZnS activated with Ag which is known to have a very high scintillation efficiency. However, in order for it to be sensitive to neutrons, the material also needs to incorporate Lithium-6. When neutrons hit the 6Li, charged particles are produced in the resulting reaction which can then trigger the ZnS:Ag to release light.

3. Collection and Transfer of light – A component needs to transfer the light from the scintillation reaction to the photomultiplier. Specifically, wavelength shifting (WLS) optical fibers were used. These fibers are doped with special dyes that absorb light of one colour and re-emit in another.

2. Conversion of light into an electrical signal – We need an efficient way of turning our collected light signals into electrical pulses so that we can analyse the data. Silicon photomultipliers were used. They are compact, inexpensive, well-established and well suited to multi-channel detection systems.

a) The 2D pixelated detector

In this design each individual pixel in the detector consists of a scintillator and is separately connected to the silicon photomultiplier via a WLS fibre. The pixels can then be arranged in a 1D or 2D array as required.

For the project, a 1D prototype was built and compared to a helium-3 detector. The high yield of detection possible in this design has led to a high trigger efficiency and low sensitivity to gamma radiation. The count rate capability is also a factor of 6 times higher than is normally achieved with these types of scintillator detectors.

b) The light sharing detector

In this design, the WLS fibres which are embedded into the scintillator material itself are read out on both sides of the sensitive unit. When the light is released by the scintillator after impact, it travels into the fibres and the light intensity is measured at both ends of them. The relative intensities can then be used to determine where along the length of the fibre the impact occurred, providing the position information needed for two-dimensional sensitivity.

For this project, special WLS fibres were developed by Kuraray. Three different bars were then produced containing a different number of fibres: 3, 8 and 12 (see picture above) and have been tested at PSI. So far trigger efficiencies of between 70% and 90% have been achieved.