Report on Workshop II in SINE2020 WP 10 on Data Treatment 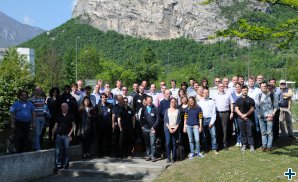 The focus of the 2nd workshop, which took place at the Institut Laue-Langevin (ILL) in April 24-25, 2017, was the first deliverable on guidelines and standards. Despite this rather technical topic, the number of participants exceeded the anticipations with 61 participants and with many external and potentials users (as opposed to developers from the member institutions of work package 10).

Contents of the 2nd workshop exhibit current highlights of the WP10 Data Treatment:

The establishing of guidelines and standards for development of data treatment software was led by Anders Markvardsen from ISIS and presented and discussed at the workshop in plenum. There were parallel sessions scheduled for Imaging, SANS, Reflectometry, Mantid for continuous sources + QENS and Simulations.

Imaging. It was announced that PSI has given the formal approval for converting MuhRec and KipTool to open source software, which is urgently needed for fostering joint collaboration on the same code base. Moreover it was decided to more strongly marketing the software at e.g. neutron imaging schools. Besides, an overview of different software programs used in neutron imaging was presented but also obtained from the participants.

SANS. This session had only few participants, most likely because it followed closely after a
SasView codecamp. The participants represented however users from institutions those are not
neutron sources, so the session was used to obtain user feedback. Moreover, the collaboration started with ESRF on usage of the ESRF SILX module (Scientific Library for experimentalists).

Mantid for data reduction at continuous sources + QENS
In practice this was split into a session for Mantid on the first day, which focused on status updates and knowledge sharing between the continuum sources (ILL, MLZ/FZJ, and PSI) that are in the process of rolling out Mantid for data reduction at their instruments. Fitting software for QENS was the topic for the morning session on day two even though resources in WP10 has not yet been dedicated to this. The session high-lighted the lack of a widely accepted analysis software for QENS. In this regard, the situation for QENS mimics that of reflectometry. It was decided to organize a follow-up workshop specifically for QENS.

Muon spectroscopy, phonons and simulations
This session high-lighted that many facilities have development activities in this domain those are not well coordinated, and the need for more European coordination was emphasized. A spin-off group formed and successfully planned the next activities for the effort in WP10 on muon spectroscopy.

A report on guidelines and standards for development of data treatment software for neutron scattering encompassed the first deliverable in WP10. The work on defining Standard and Guidelines was led by Dr. Anders Markvardsen from ISIS, who prior to writing the report had asked WP10 participants to complete a questionnaire for the software considered in this work package. Moreover, the developers of the McStas software, which is commonly used in the neutron scattering community, also completed the questionnaire. The result of that questionnaire was discussed in plenum at the workshop, which resulted in comments and corrections that were included in the final report.